After coming oh-so-close to a World Series championship last season, the Royals were favorites to win this year; and they did!  It was an incredible series to watch and a combination of factors came together to entice us to make the call to attend the celebratory parade in Kansas City today.  Between the novelty of the experience, the fantastic weather, and the price (free!), we just couldn’t pass it up.  We left the house early with a game plan to enter the metro from the west, avoiding all interstates (didn’t want to be trapped) and opted for Shawnee Mission Parkway into Mission where we then zig-zagged to the Northeast, ultimately landing around 34th and Broadway where we parked on the street facing south.  The last thing we wanted was to be trapped 5 or 10 rows deep in the lawn parking at the WWI Memorial or elsewhere.  We then walked in to the grassy lawn in front of Union Station to take in the festivities.

We realized this may be one of the last times we can utilize the Kelty backpack before Mae outgrows it.  She was a little grumpy to start, but that was nothing that a halloween ring pop couldn’t fix.

The migration to the memorial lawn; from the South 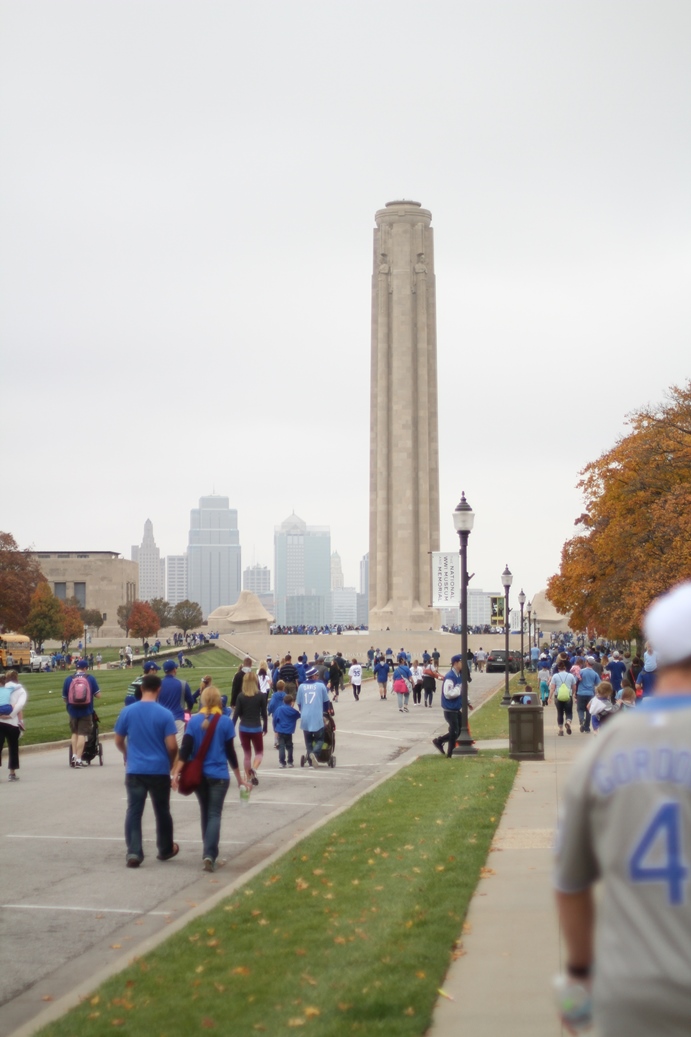 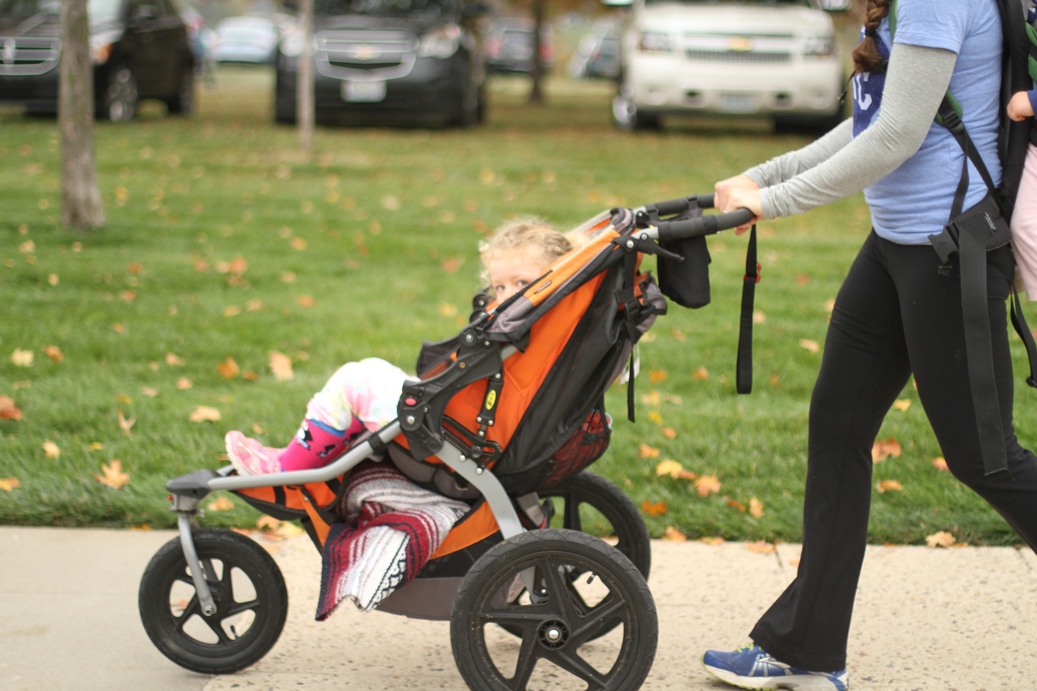 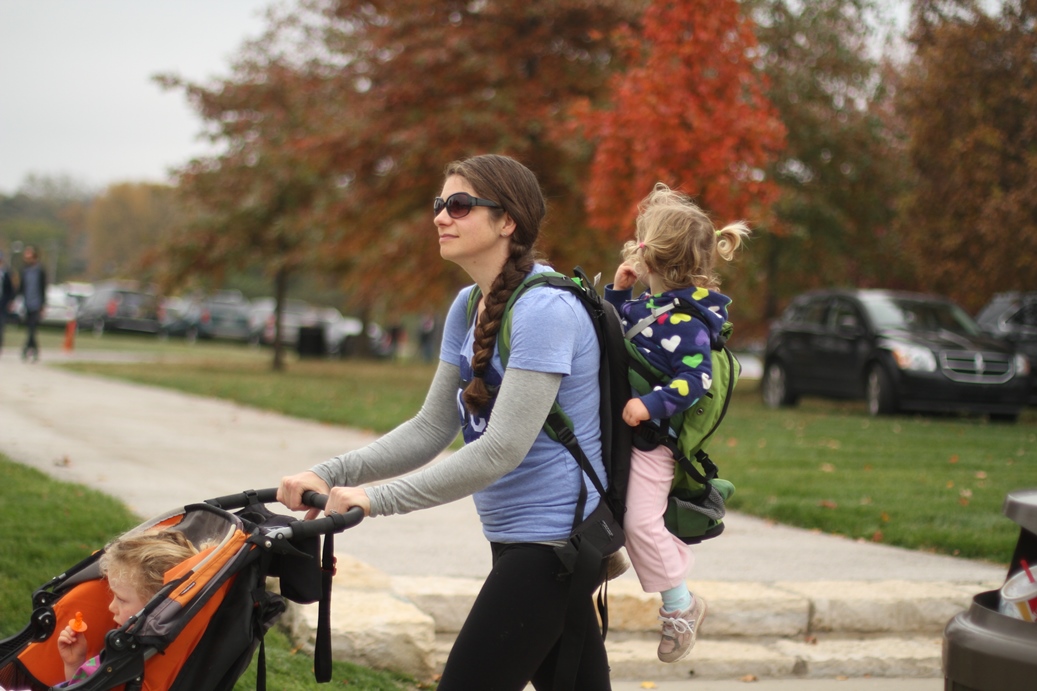 After passing the memorial, we looked back, looking South, to see the terrace of the memorial dotted with ants — I mean, Royals fans. 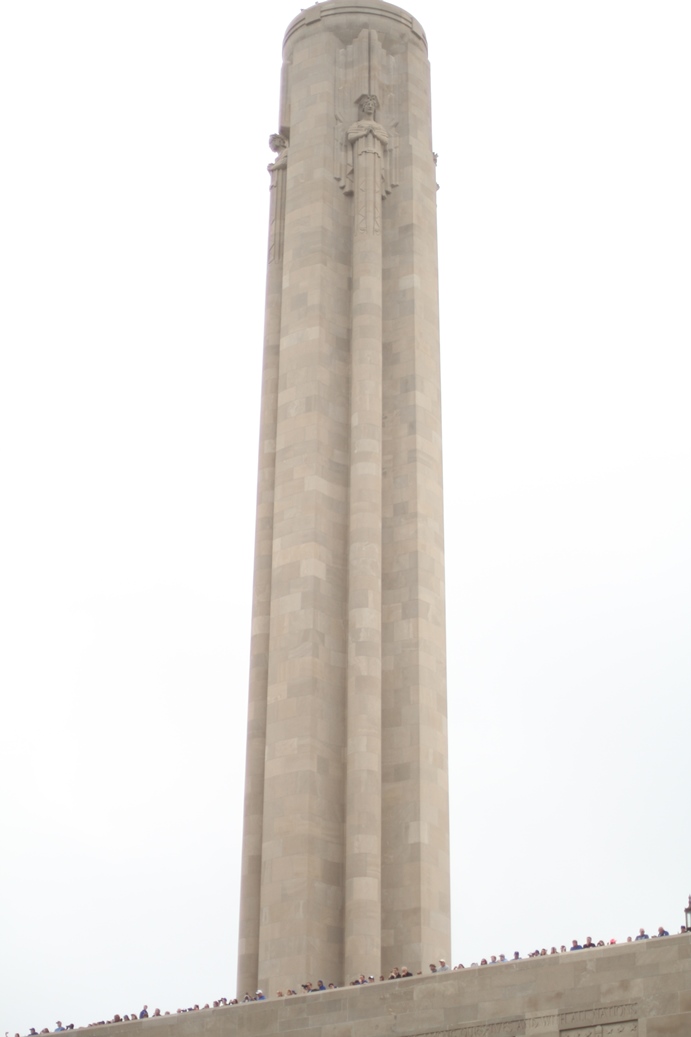 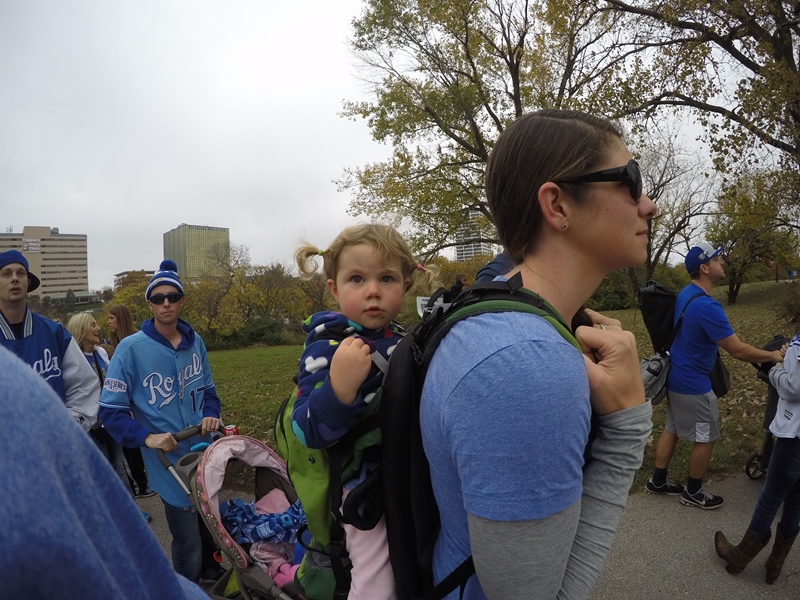 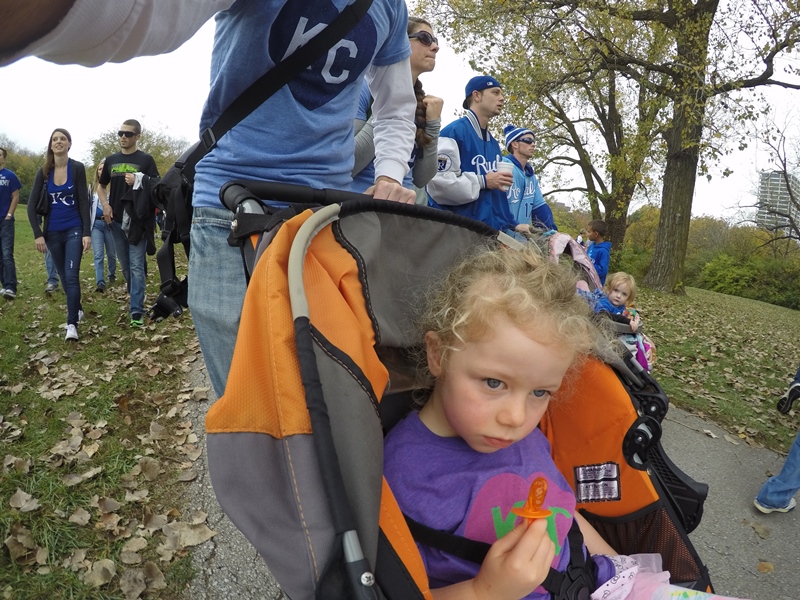 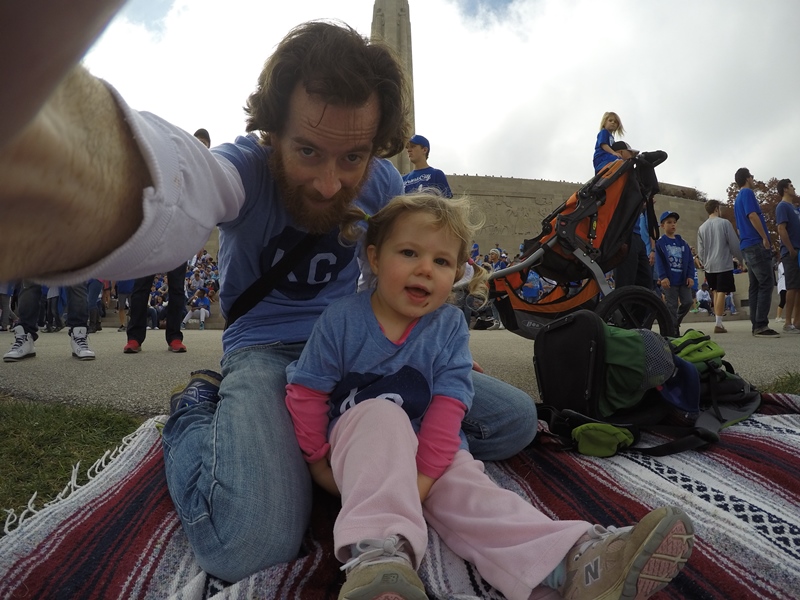 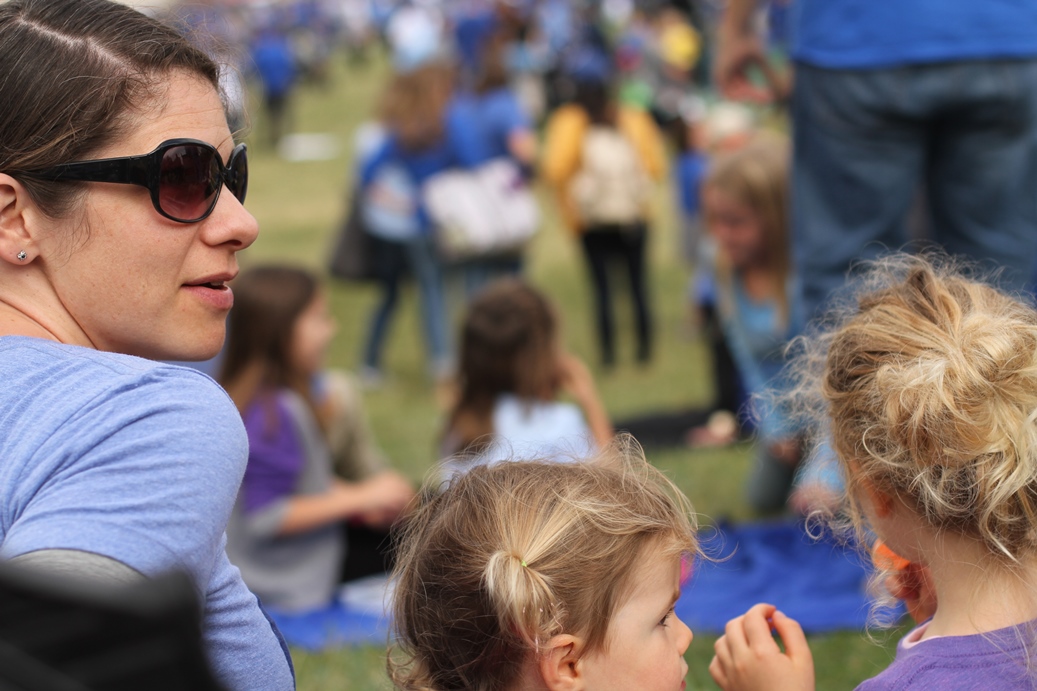 Coordinating a shot with a 2-year old and 4-year-old looking into the camera at the same time (with anything remotely resembling looks of happiness) is something tantamount to being perfectly-positioned a half-mile southeast of an F5 as it churns through a Kansas farm field (i.e., I realize it will likely forever elude my capture).

But that won’t stop me from trying! 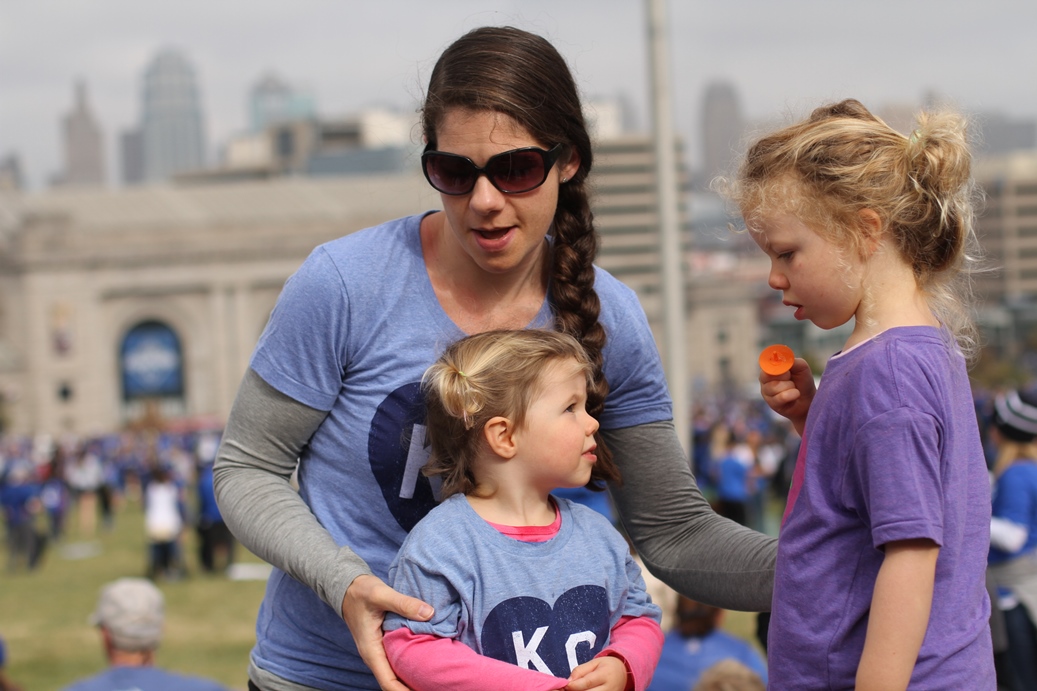 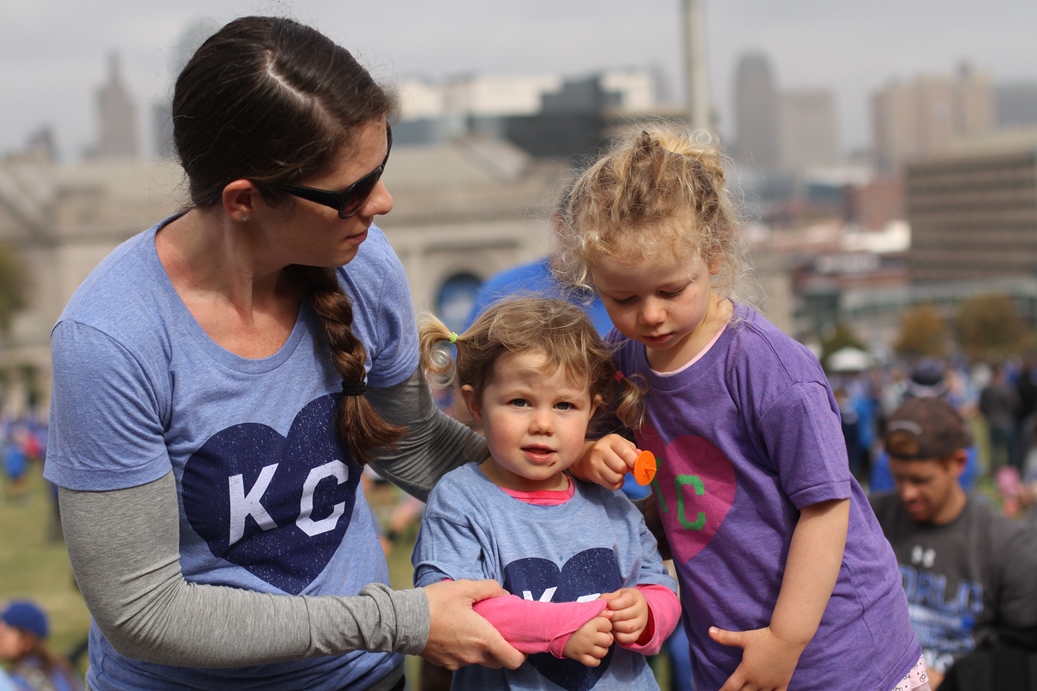 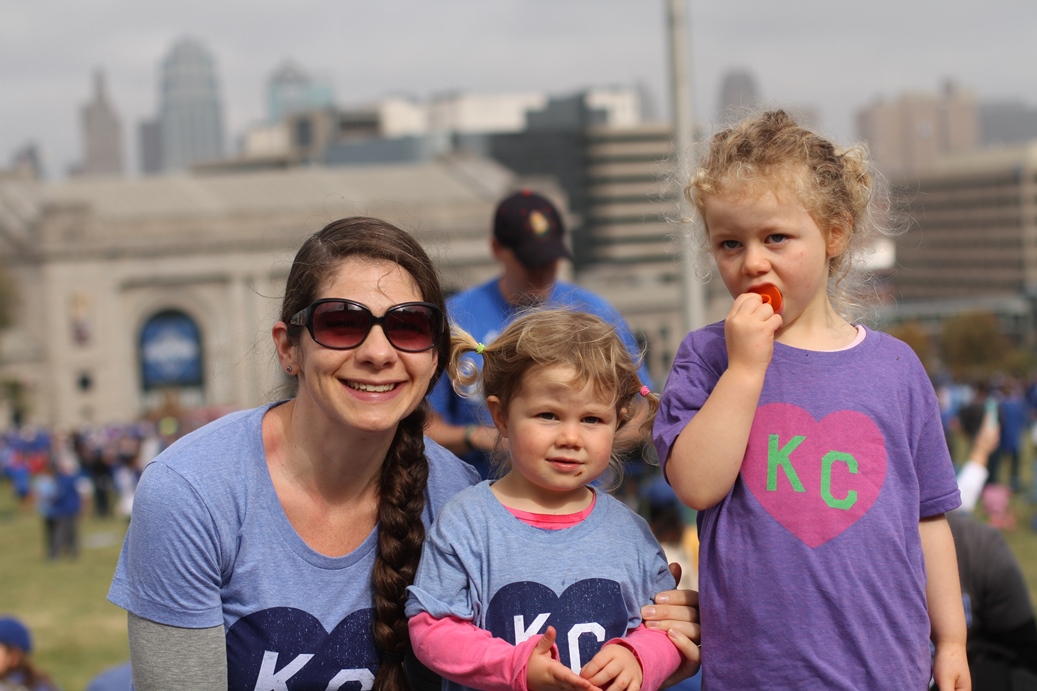 The back of the lawn was sparsely covered when we first arrived, but quickly filled in. 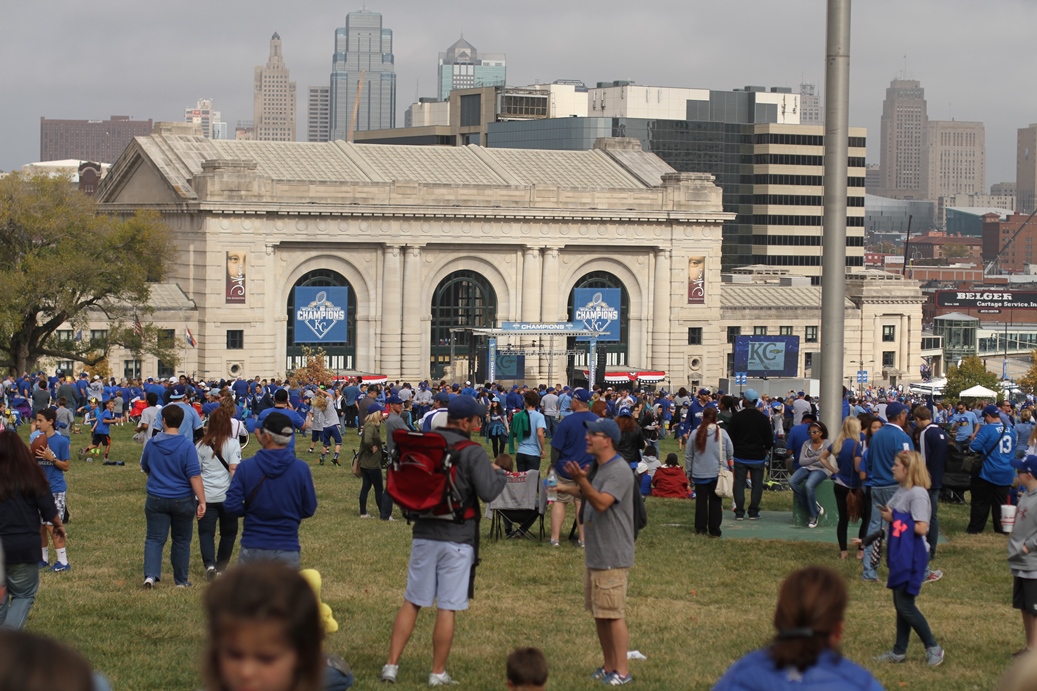 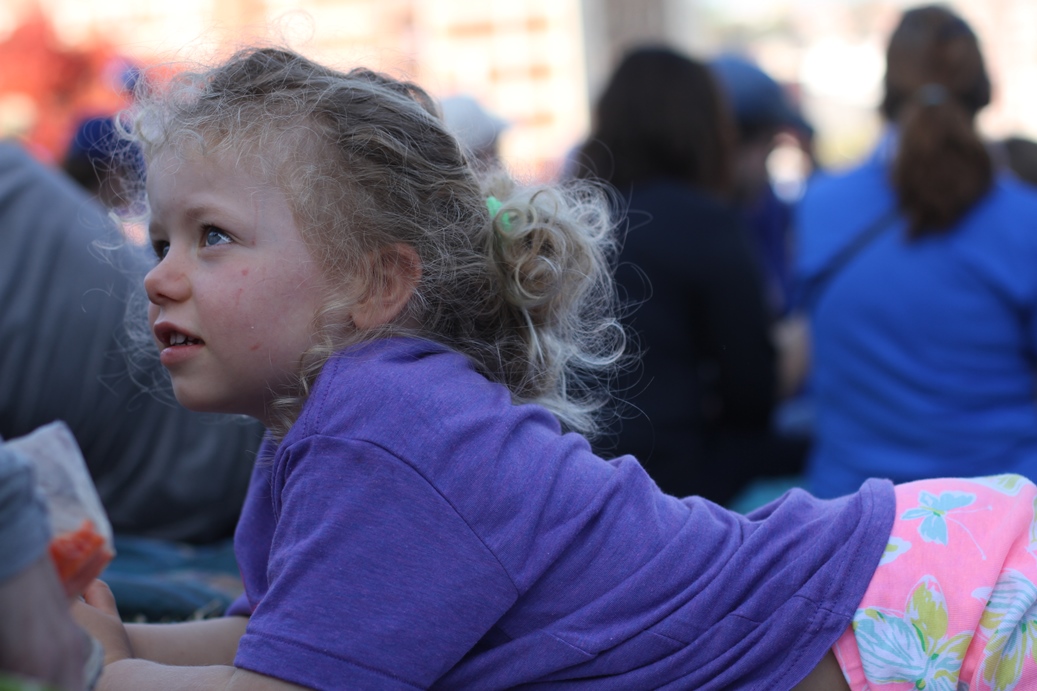 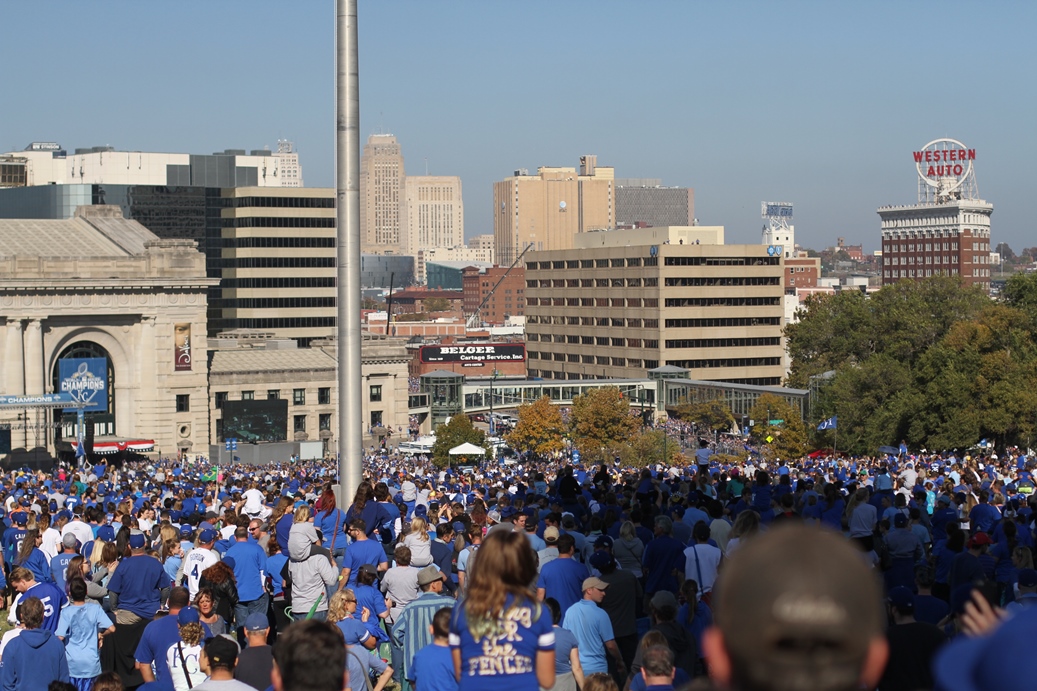 A reflection of the magnitude of the event: crowds even gathered on the particularly-steep slopes of the hill beneath the Crown Center Westin. 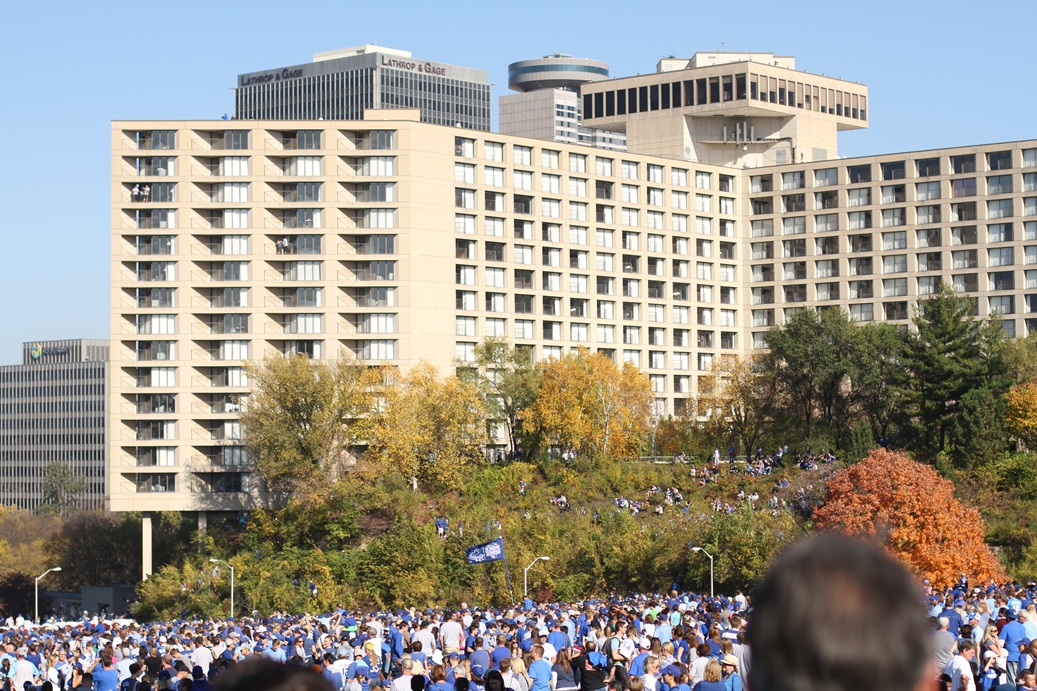 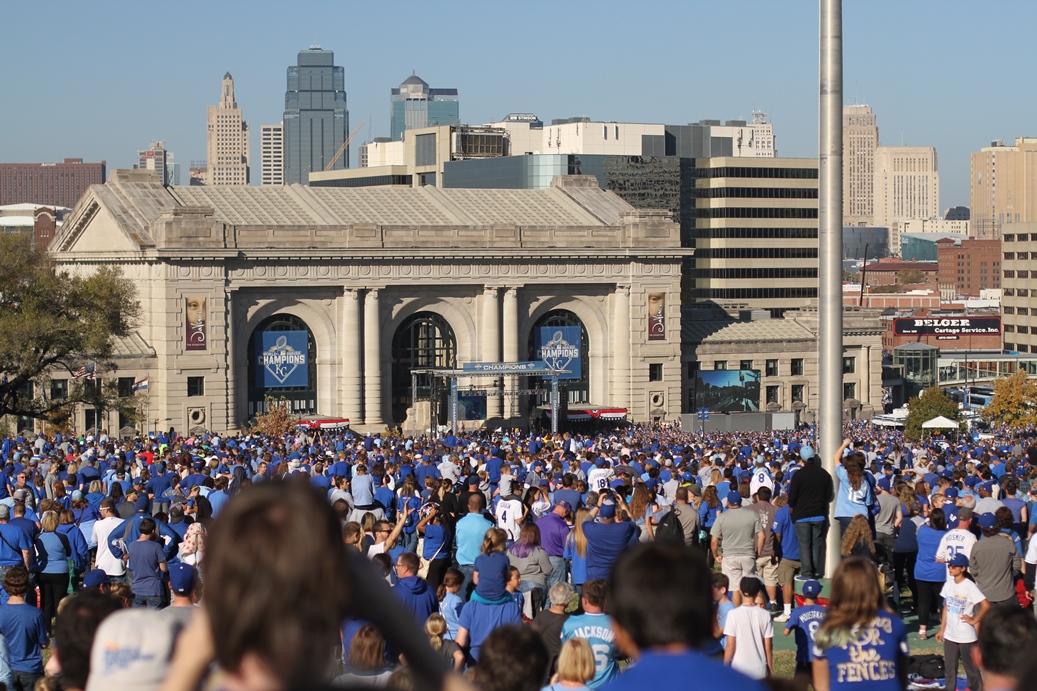 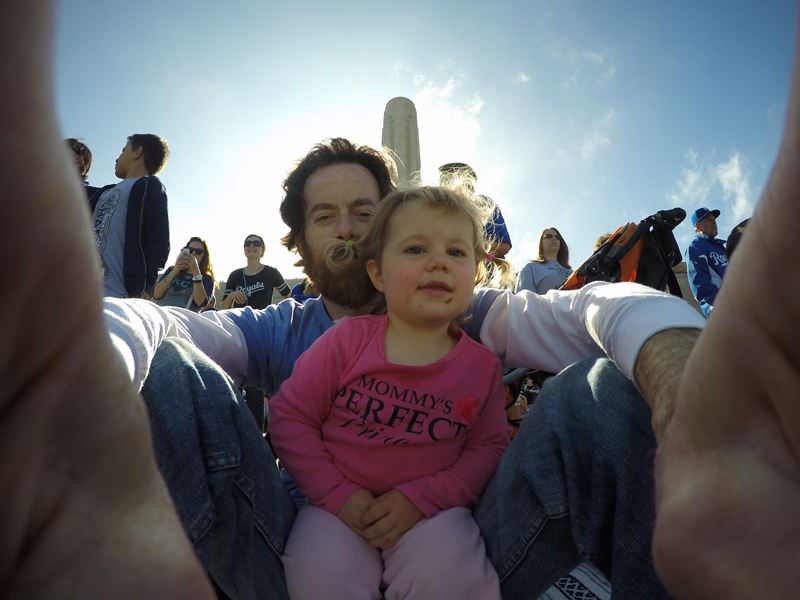 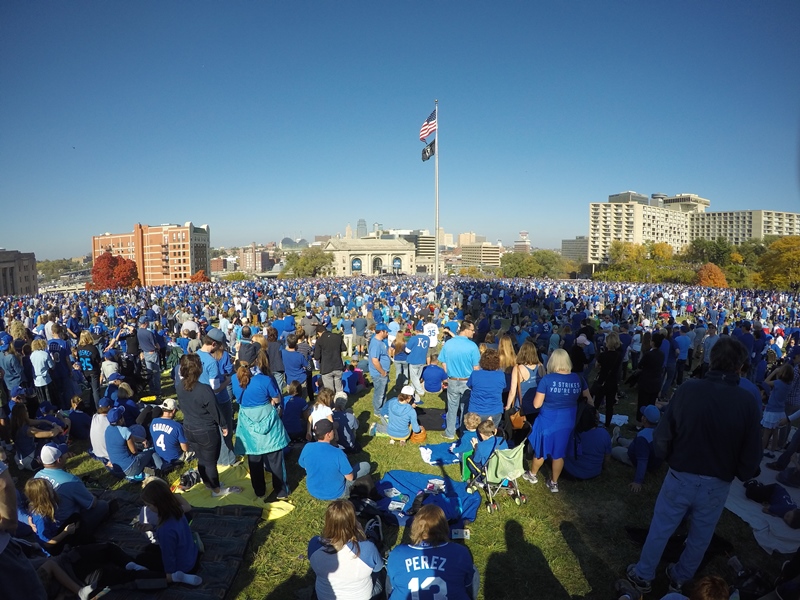 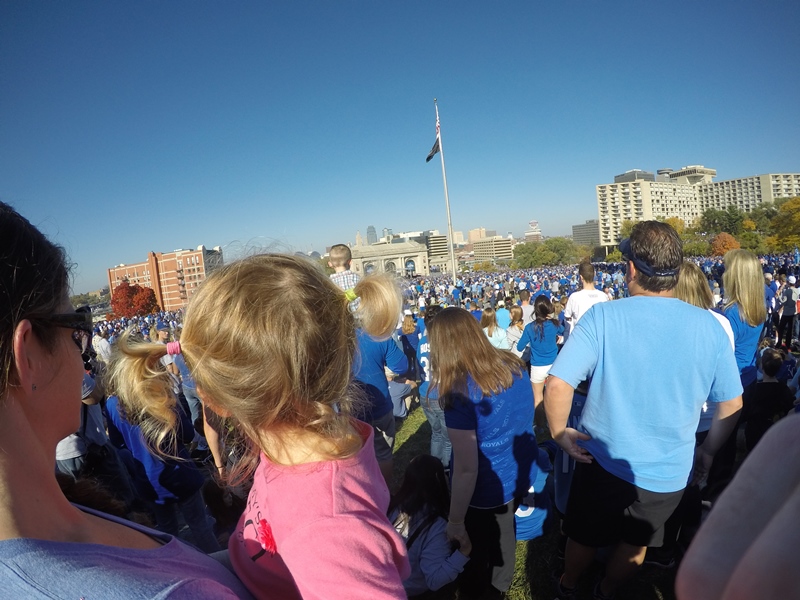 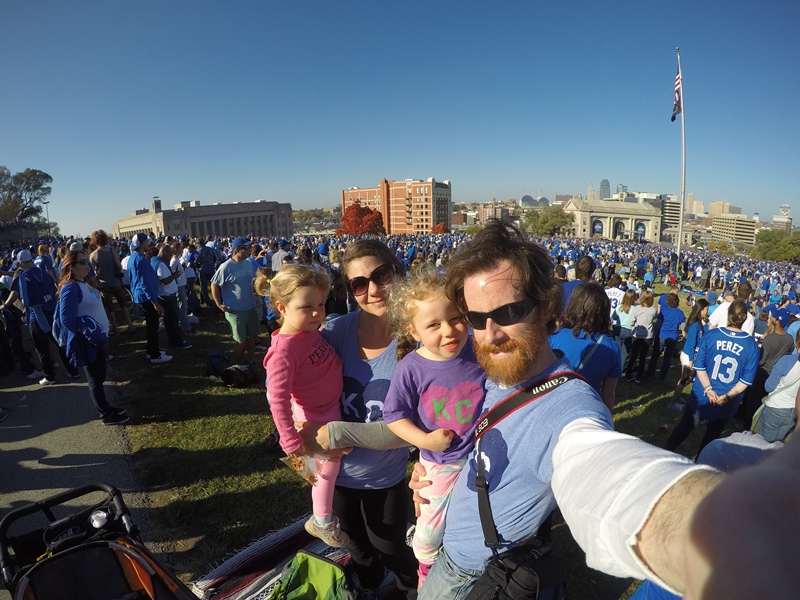 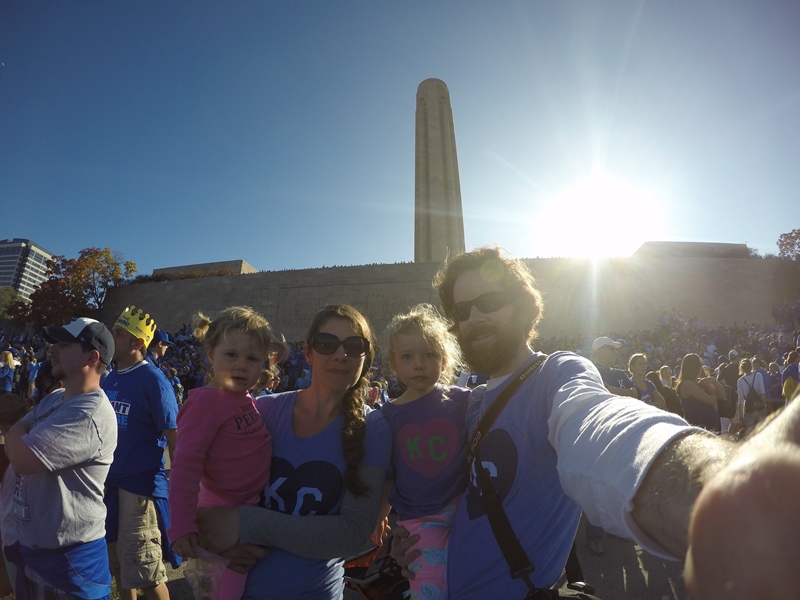 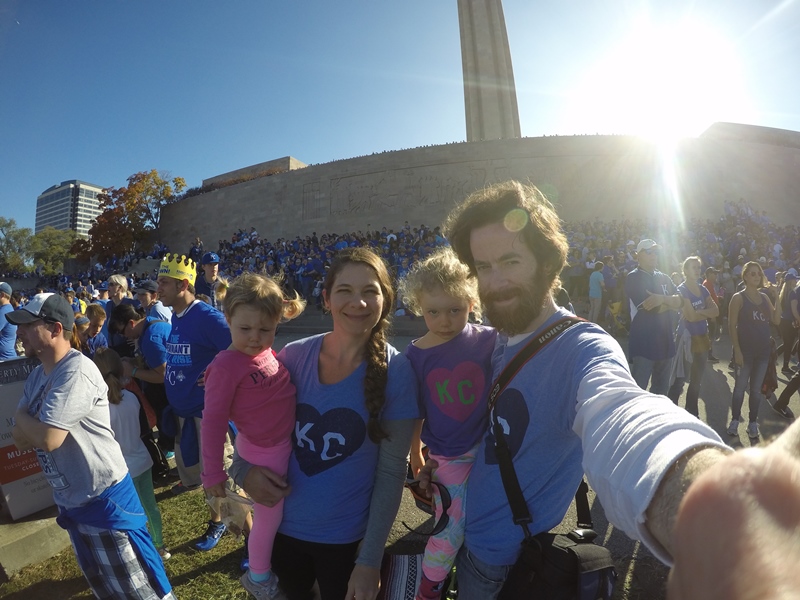 The trek back to the car was only about a mile and a half or so; but it was just enough time for Mae to make her way to dreamland. 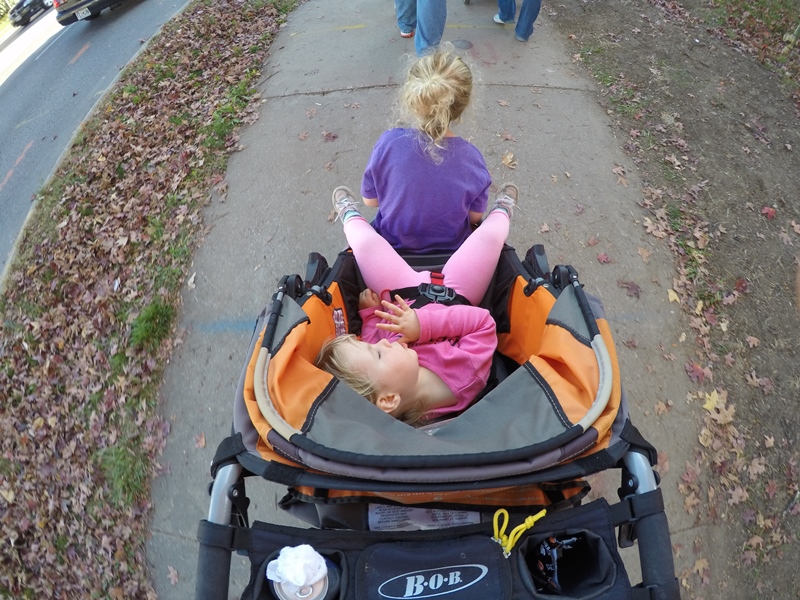 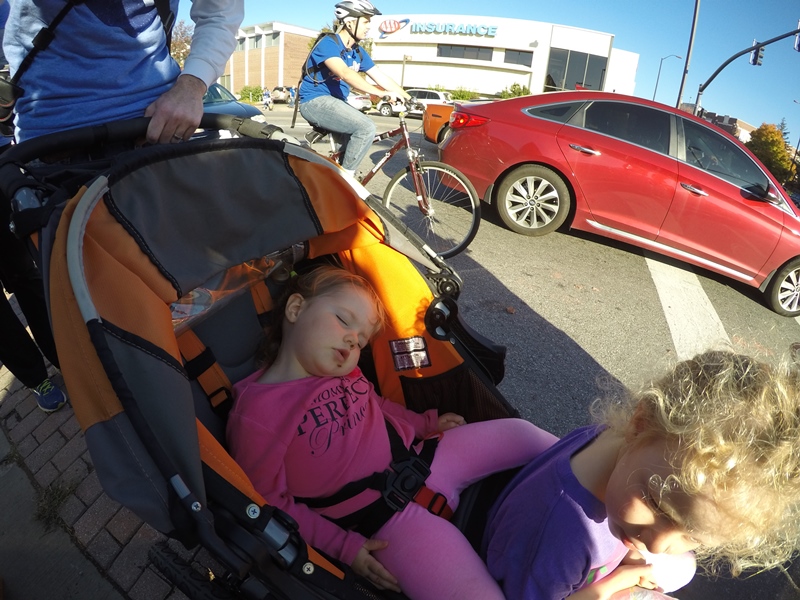 Kel overheard a father in a large family next to us on the lawn share his take late in the day:  “Something to write in the notes for the World Series Parade 2015, probably don’t do this again.”  We couldn’t have said it better.  That doesn’t say we shouldn’t have gone today; but it may simply be one of those “Great event – can cross that one off the list; been there-done that!” items.